Challenge The Darkest of Winters: Session #5

The Darkest of Winters: Session #5

“And to think this time last year, my biggest worry was keeping my bowels move’n on a regular schedule.” -Jessy Hannaford, reminiscing about the good o’l days.

“Hey, that’s one upside of a zombie apocalypse; you’re never constipated for very long.” -Riley Stetson, proving there’s a positive side to every situation. 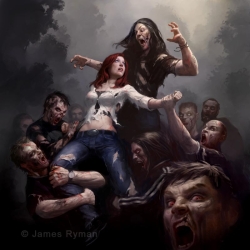 Riley was awoken rather painfully early the following morning to a 170lb Greyhound stepping on his groin, as it walked over him to head to the basement door and whine pitifully to be let out. Resisting the urge to kill the offending animal, Riley said a quiet prayer of thanks it was at least housebroken, and looked around to see if anyone else was awake to join him on checking out the upstairs to see what was left from last nights storm.

He pauseed in surprise when his flashlight fell across the shapes of Renee and Heather, intertwined in each others arms, and barely covered by a threadbare blanket. Deciding to let the young couple sleep, he instead woke his wife, who was less then thrilled to be chosen for early morning recon, especially with how tired she was from the last nights ordeal.

A quiet discussion later she agreed on letting everyone else rest with all they've been through. (and raising an eyebrow in surprise at the news from Riley that Heather and Renee are 'apparently closer to each other then we first thought.')

Carefully they proceeded topside, the dog quickly doing its business in a near by cage as Riley and Jamie were stun struck at the devastation surrounding them. The street outside the building was a mess, with an overturned dumpster nearly covering the lobby doors, the remains of a next door clothing store strewn haphazardly across the street and nearby buildings, with broken glass, shards of wood, and chunks of brick littering the road in every direction. Overhead a sky the color of lead stretched to the horizon, seeming almost low enough to scrape the tops of the higher rising structures.

Thankfully, the streets seemed deserted after last nights storm, only a chilly wind filling the dead silence, making Jamie shiver and snuggle up to Riley for warmth as it occurred to her this was the world their child was going to be born into, and have to be raised in.

Meanwhile down below, more of the dogs headed top side to take care of their business and look to their new masters for direction, Riley muttering about when all is lost, there's always the future.

A few minutes later they returned down below, using Riley's last can of sterno to heat breakfast, a can of Vienna sausages and two cans of tomato soup, the last of their rations besides several bags of corn chips. (And lots of dog & cat food)

Afterward everyone enjoyed a somewhat subdued breakfast, Heather and Renee sitting with their arms around each other during the meal, the unspoken statement they are together now, clear to everyone.

As Renee looked around for a suitable crutch for Jessy to use, Tommy and Jamie helped gather up their belongings while Riley busied himself with an ammo count and Heather looked over the newly acquired animals.

Meanwhile Jessy noticed the sad state of his beloved cigars. Flattened, soggy, and smelling faintly of sewage, the fine cigars were a shadow of their former $16 a piece quality, looking more like a pocket of dog droppings then anything remotely resembling Havana's finest.

After giving them a tearful look, and pondering the chance of getting more, Jessy promptly declared: 'fuck it, I'll smoke'em anyway.' (much to the amusement of Tommy) and set to drying them out over the can of sterno in the basement.

The end result of Riley's ammo count was sobering. Most of their ammunition had been expended, with barely a clip and a half for each assault rifle, the shotgun of Renee's down to a single reload, and two spare rounds, with Heathers lever action rifle having three reloads, but covered in slime from the storm drain, its priceless electronic scope cracked and useless. Their handguns fared slightly better, with most of the group having at least 4 reloads a piece, Jessy deciding it was time to arm Tommy with his .22 six shooter.

Heather let them know the rescued animals were in poor condition as well, most of them malnourished and half starved, with the greyhound, surprisingly, pregnant. Tommy and Jamie managed to scavenge a few spare bags of peanuts and chips from the upstairs break room, and almost an entire can of instant coffee. (In a moment of inspiration Riley also told them to scavenge all the toilet paper they could find, since what they used to own was left behind near the river bank.)

With Jessy walking at a limp, and Tommy still weak from his scorpion bite the group entered into a lengthy discussion about whether to push on, or hole up in the basement for 3-4 days until they were in better condition. (Riley pointed out they could eat the dog and cat food without problem if it came down to it.)

In the end they decided to press on, afraid the zombies within the city could easily find and overwhelm them with how little ammo they have. Eventually they decided, (after consulting a pocket atlas Riley still owned,) to head for a small private air strip on the outskirts of the city a couple hours drive away, hoping they could use a small twin engine prop plane to make real progress towards Alaska. Renee assured them she took enough piloting lessons she can handle a plane without difficulty. (Renee's player actually chose piloting small airplanes as a secondary skill choice during char creation, something everyone else at the table told her was a waste of a skill selection at the time.)

A quick scan of the back parking lot revealed a pick up truck sporting the clinics name, and a large cap on the back, easily big enough to fit everyone and the animals inside, and have enough horsepower/mass to push through the few vehicles between them and the road out of the city.

A quick loading later and Riley was behind the wheel, Heather riding shotgun (literally!) with Renee next to her as weapon reloader/back up driver 'just in case.' Jessy sat in the back near the tailgate, his AK gripped eagerly, (and still on full auto >.<) puffing somewhat hopelessly on a freshly dried yet still slightly soggy cigar. Jamie laid further in the back along side Tommy, all of the dogs, a half dozen huge bags of dog food, and the jug of water from the lobbies water cooler.

Hoping the small private airport would have serviceable planes and not be overrun with zombies, Riley shifted into gear and roared along the road, confident the vehicles speed would allow them to outrun any zombies and clear the city before drawing too much attention.

(Unnoticed by Riley however, a single leather clad young man, sporting a hot pink mow-hawk and carrying a battered mp5 watched the trucks departure from behind a nearby bulletin board with interest. Guns, dogs that can be butchered for food, women that can be used for fun and then zombie bait; a profitable opportunity indeed. With barely a moments pause to wipe the drool from his lips the scout hurried back to inform his boss 'Slag' of the hapless truck hurtling across the roadway, ripe for the picking...)

Will the heroes road trip meet a fatal and sudden end? Will Jamie ever find the time to tell Riley she's pregnant? Will arming Tommy with a handgun prove to be the groups undoing or salvation?

Find out in adventure Synopsis #6!

Login or Register to Award Silveressa XP if you enjoyed the submission!
XP
25
HoH
0
Hits
1,290

There must be pretty good times to be had in this campaign!

The Darkest of Winters: Session #5 Forks

The Darkest of Winters: Session #5 Hall of Honour

“ '...the Ilthian mountains. A craggie masse of rock rysing from the Ilth'n plaines. The waters whych springe from it are ful of godeness and fortyfie those who drynk them [+1 STR]. Alas the vyle beasts resydent in these hills also bathe in these waters, and in the doing gain great strength. Foes mortallie wounded have bene known to flee, onlie to return, revytalised houres later...' - Chronicler Eamusil, Mondopedia, Vol XV (The Lands of Sylmen)”
ephemeralstability
“ The Water-Rift is a massive crater in the center of the desert, in the center of which sits a large, unfathomable machine that produces water. Thusly, it is a veritable paradise in the center of the burning desert, and a unique culture exists there.”
CaptainPenguin
“ A society or country has a unique method of correction. Criminals are imprisoned in a dungeon with two options: Serve their time, or try to escape. Those who manage to escape alive, their crimes are forgiven early.”
WAR10CK